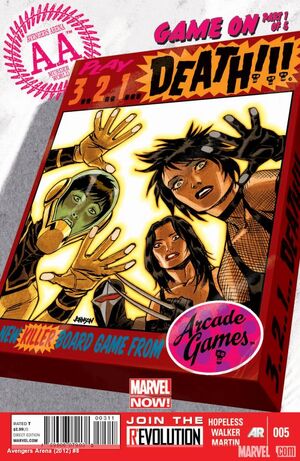 I'm not the odds-on favorite like you are. I've got one thing left to do. One thing keeping me going. After that...whatever, this thing can run its course.

Appearing in "Game On, Part 1"Edit

Synopsis for "Game On, Part 1"Edit

Juston Seyfert is revealed to have survived the attack from the cybernetic creature, but is now paralyzed below the waist due to the injuries sustained when the Sentinel crashed. Distraught at the loss of his best friend, Juston salvages the remains of the Sentinel and creates a suit of battle armor which he uses to attack Death Locket. After Nico Minoru and Chase Stein also become involved in the battle, Chase Stein transforms into the new Darkhawk, known as Chasehawk, and attacks Juston.

• It’s 2 chances in 1 month to discover why iFanboy calls AVENGERS ARENA “a ton of fun” and IGN promises that “You will be convinced this series has taken the kid gloves off!”.

Retrieved from "https://heykidscomics.fandom.com/wiki/Avengers_Arena_Vol_1_8?oldid=1412107"
Community content is available under CC-BY-SA unless otherwise noted.