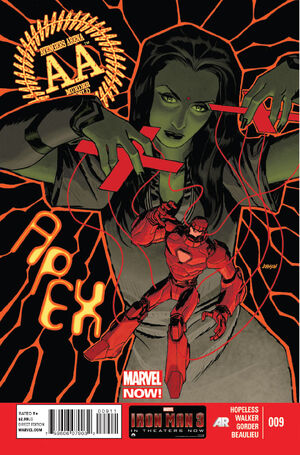 Am I my sister's keeper? Am I responsible for the evil she does? Yes I am. I knew just how this would turn out. I've always known. There's only one way to stop my sister. But I'm too selfish. Too cowardly to say the words. All of these people will suffer so I can live. Trapped behind the eyes of a monster.

Appearing in "Game On, Part 2"Edit

Synopsis for "Game On, Part 2"Edit

In a flashback, it was shown that Apex is actually the twins Katy and Tim who ended up sharing a body following an experiment by their parents gone wrong. Since then, both of them were unaware that they share the same body.

Back in the present, the battle between Chase Stein as Darkhawk and Juston Seyfert gets aborted when Tim's technopathic powers activate and the groups vote for Tim/Katy's life or death. Juston is among those who vote for death. When Tim reverted to Katy, Juston is murdered by Apex who breaks his neck and then steals his Sentinel.

Retrieved from "https://heykidscomics.fandom.com/wiki/Avengers_Arena_Vol_1_9?oldid=1412108"
Community content is available under CC-BY-SA unless otherwise noted.