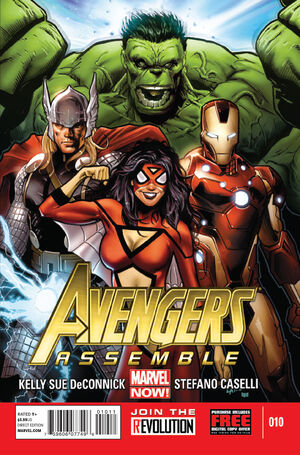 • Did you know that there’s a theory that the bacteria in our bodies actually controls our moods and may even be responsible for elements of our personalities? TONY STARK and BRUCE BANNER did.

• What happens when a 20 million-year-old evolutionary catalyst infects a HULK? Could it be a cure?

• Meanwhile, on the outside, CAPTAINS MARVEL AND AMERICA must find the missing scientist before he unleashes said bacteria on the world.

* The cover of this issue is an actual repainted version of an unused cover for Avengers Vol 4 #9.

Retrieved from "https://heykidscomics.fandom.com/wiki/Avengers_Assemble_Vol_2_10?oldid=1641305"
Community content is available under CC-BY-SA unless otherwise noted.