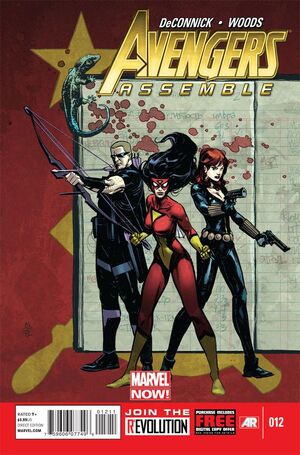 Black Widow receives the call to atone for one of her acts as an assassin: years ago she killed a young scientist named Peter Anokhin in front of his wife. Clint knows what it's all about and insists on going with her, and Spider-Woman doesn't like the idea of her boyfriend going off alone with his ex so she insists on coming along as well. They head to Siberia to meet up with Anokhin's widow Anna, but she wants nothing to do with Natasha. The marker was actually sent by her daughter Gailna's boyfriend Karl, who wants the Black Widow's help to find Galina, whom Anna believes is dead. Karl says she had disappeared in the old metro tunnels looking for the black market for a deadly, flesh-rotting drug called Krokodil. When the Avengers head into the tunnels, they soon find themselves against an overwhelming force of lizard-people and are captured. They're taken to the lizard people's lair, where they find Karl happily offering the Black Widow to a healthy reptilian Galina for revenge for her father's murder.

• Widow, Spider-Woman and Hawkeye must travel to Siberia to search for a missing girl with ties to an old Soviet assassination.

• But the truth behind this girl’s disappearance may be more than the Avengers are prepared to handle!

Retrieved from "https://heykidscomics.fandom.com/wiki/Avengers_Assemble_Vol_2_12?oldid=1724760"
Community content is available under CC-BY-SA unless otherwise noted.