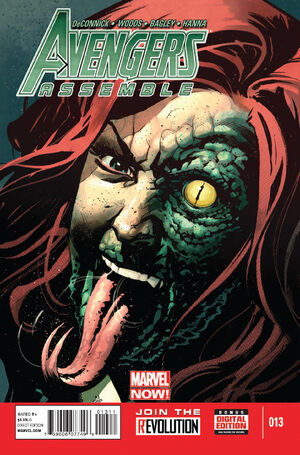 Karl offers Widow as a wedding present to Galina and proposes to her. He has also found a buyer for the lizard formula based on her father's work. It's an imperfect drug that offers a potent healing factor for a limited amount of time and Galina and her friends have been consuming it repeatedly and dangerously in secret to experiment with it in hopes of perfecting it. Karl wants to take her away from it, but she suggests that he take the drug and join her underground instead. The Avengers leap into action in attempt to put a stop to the experiment. When Karl gets knocked out, an enraged Galina slashes Black Widow's throat. Natasha is almost prepared to die in atonement for her sins, but Jessica and Clint save her by injecting her with the lizard drug meant for Karl. With renewed hope, Lizard-Widow herds the lizard people out of the tunnels and personally sequesters herself with Galina until they're both detoxed and back to normal. Reunited with her daughter, Anna still doesn't want to see Natasha ever again, but nonetheless offers her thanks in the form of Peter's journal, consisting of formulae and antidotes for everything they were working on, as well as personal notes to give Natasha some insight into the kind of man he was.

Later, back at home, Spider-Woman asks Black Widow how many of her favor markers are still out there waiting to be claimed and the answer is 'eight', one of which is revealed to be held by Clint.

• Spider-Woman caught in the middle.

Retrieved from "https://heykidscomics.fandom.com/wiki/Avengers_Assemble_Vol_2_13?oldid=1724761"
Community content is available under CC-BY-SA unless otherwise noted.