Start a Wiki
Part of the 'Marvel NOW!', and 'Age of Ultron' events 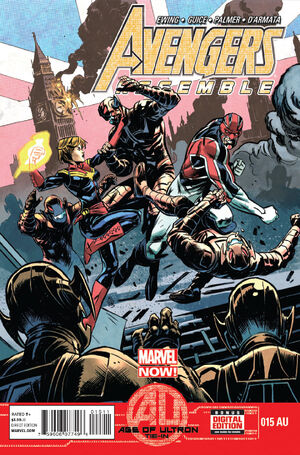 Captain Marvel is taking a nice vacation in London when the Ultron Sentinels invade the city. She fights them alongside Captain Britain and MI-13. After Computer Graham and Magic Boots Mel are killed, Captain Marvel and Captain Britain end up sacrificing their lives to destroy Ultron's main forces in London.

ULTRON RULES OK! The AGE OF ULTRON hits Britain, and Captain Britain hits back with a little help from his friends - including a vacationing Captain Marvel! Fighting a guerilla war in the ruins of London, AGGRO! is a way of life for Avengers UK - but when they might just be the last super heroes left alive, can there still be hope? Or is England dreaming?

Retrieved from "https://heykidscomics.fandom.com/wiki/Avengers_Assemble_Vol_2_15AU?oldid=1408756"
Community content is available under CC-BY-SA unless otherwise noted.