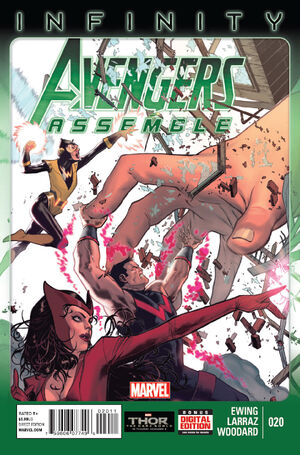 When the Terrigen Bomb was detonated in Earth's atmosphere, a housewife named Alice Taylor-Kezierski was exposed to the Terrigen Mists and soon entered a state of Terrigenesis. After emerging from her cocoon, she accidentally enlarged her husband, causing Alice, two of her neighbors, and her house to shrink to the Microverse. With the help of Wasp, Scarlet Witch, and Wonder Man of the Uncanny Avengers, Alice was able to enlarge her house and her neighbors and shrink her husband back to their original proportions.

• An eight-year-old girl fights a centaur at the heart of an atom!

• AND THAT’S JUST THE STUFF WE CAN TELL YOU ABOUT!

Retrieved from "https://heykidscomics.fandom.com/wiki/Avengers_Assemble_Vol_2_20?oldid=1408750"
Community content is available under CC-BY-SA unless otherwise noted.