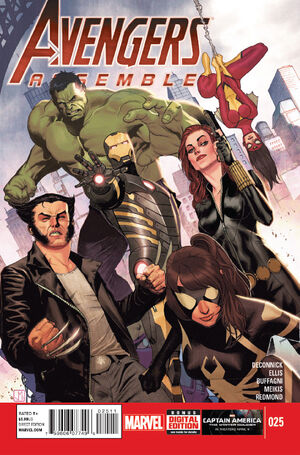 • The demented Dr. June Covington has taken on A.I.M., and is winning. The Avengers are caught in the middle of this Mad Science War! • But, now, this situation is more important -- because there’s a second Terrigen cocoon in New York, ticking like a time bomb, about to go off, Covington wants it and A.I.M. has it.

• SPIDER-GIRL, who has been mentored by the Avengers in her search for her teacher, abducted by Covington for Nefarious Genetic Purposes, now leads the charge, as the Avengers Assemble to end this conflict before the Terrigen cocoon explodes and New York is doooooomed.

Retrieved from "https://heykidscomics.fandom.com/wiki/Avengers_Assemble_Vol_2_25?oldid=1646463"
Community content is available under CC-BY-SA unless otherwise noted.