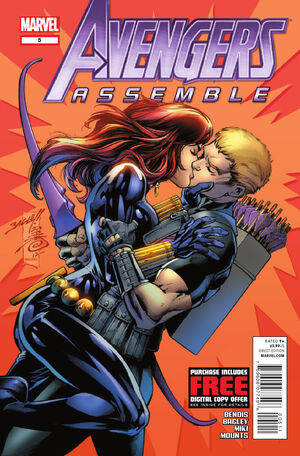 Opening on a flashback from "days ago" in deep-space, the Guardians of the Galaxy relay an excursion of theirs against the Brotherhood of the Badoon on an unnamed planet, rescuing its indigenous blue-skinned, four-eyed, three-fingered people from attack. Halting the invasion, though suspicious that the campaign was just too overt, the Guardians question surviving Badoon officers who confirm their diversionary role. Thanos indeed tasked the Badoon with keeping the Guardians occupied far away elsewhere while he attacked Earth. This serves to bring the Avengers up to speed on the Guardians' involvement in the greater crisis.

As the two teams intermingle and compare notes at Stark Tower, Hawkeye notices Black Widow was apparently wounded in the S.H.I.E.L.D. Helicarrier battle. Taking her aside to dress her wounds, the two have a moment together. Starting out as a "pep talk" drawing from their long interpersonal history and former partnership, it escalates into awkward romantics, leaving both of them confused and uneasy as to what just happened.

Back at the confab, the Guardians divulge that the planet is "off-limits" to all extraterrestrials, explaining Thanos's use Earthbound-agents in amassing items of power. Refocusing attention as to what specifically The Mad Titan may have gotten ahold of, Captain America charges Iron Man with readying a space-worthy Quinjet. Rocket Raccoon volunteers for that endeavor as well, while Cap enlists Hulk for a side-mission.

Encountering General Whedon outside a desert Army base, Cap questions the officer as to what was stolen when his convoy was attacked by Zodiac member Aquarius[1]. Remaining true to orders in maintaining secrecy on the military operation, Cap is forced to use Hulk as intimidating leverage against the general.

Returning to Manhattan, Cap reveals to the others that Thanos has attained a government-manufactured Cosmic Cube. The heroes then board their respective vehicles and embark for outer space.

PLUS: The return of the characters you demanded!

What happen on the cover does happen in this issue.

Retrieved from "https://heykidscomics.fandom.com/wiki/Avengers_Assemble_Vol_2_5?oldid=1527996"
Community content is available under CC-BY-SA unless otherwise noted.