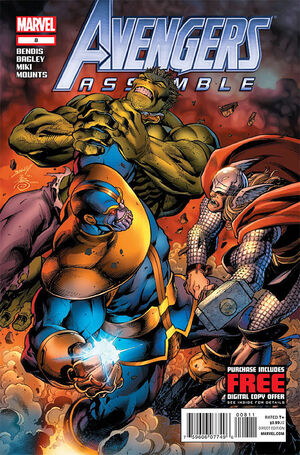 • The explosive conclusion to the Avengers’ cosmic odyssey!

• Will the Avengers and the Guardians of the Galaxy be able to stop Thanos from his quest to make Earth the throne world of his new empire?

• The explosive fallout of the storyline will change one of the Avengers’ lives forever as a brand-new Marvel initiative spins out of this bombastic series.

Retrieved from "https://heykidscomics.fandom.com/wiki/Avengers_Assemble_Vol_2_8?oldid=1752861"
Community content is available under CC-BY-SA unless otherwise noted.