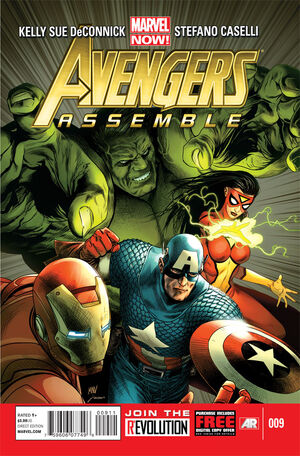 ALL-NEW CREATIVE TEAM WITH ALL-NEW OUTSIZED ADVENTURES! • Kelly Sue Deconnick (CAPTAIN MARVEL) and Stefano Caselli (AMAZING SPIDER-MAN) team up to tackle the titanic tales YOU DEMANDED! And in continuity to boot?! • Two scientists. Two giant egos. One wears a tank. One is a tank. Tony Stark and Bruce Banner are SCIENCE BROS! • When a fellow bigbrain goes missing, wanna bet who can find him first? It’s Amazing Race, Avengers-style, as Iron Man and Hulk form their teams and embark on a global manhunt with the ultimate prize at stake…bragging rights!

The cover of this issue is an actual repainted version of an unused cover for Avengers Vol 4 #24.1.

Retrieved from "https://heykidscomics.fandom.com/wiki/Avengers_Assemble_Vol_2_9?oldid=1646402"
Community content is available under CC-BY-SA unless otherwise noted.