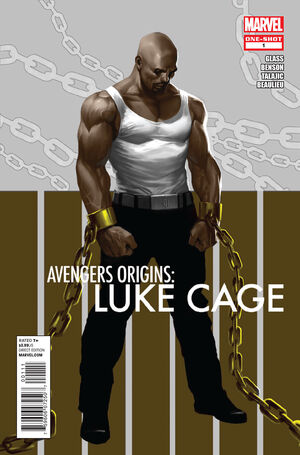 You're right, Stryker. I lost my way. I lost my humanity. I forgot who I was...but then something happened -- Something I didn't expect -- I was reborn!

EXPLODING FROM THE PAGES OF NEW AVENGERS... What makes someone a hero? An Avenger? Is it super-powers? An indomitable will? An innate sense of right and wrong? For Luke Cage its one terrible mistake that has haunted him his entire life. But can a lifetime of good deeds make up for his years spent on the other side of the law? And will that past ever let him go, or will it tear him to pieces?

Retrieved from "https://heykidscomics.fandom.com/wiki/Avengers_Origins:_Luke_Cage_Vol_1_1?oldid=1612440"
Community content is available under CC-BY-SA unless otherwise noted.