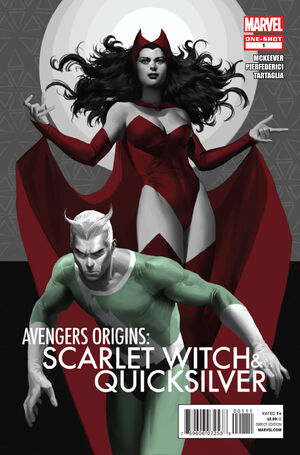 All we'll ever need is each other. Absolutely, that's true, my dear brother. But if you'd stop being so cynical for one second and take this chance with me...we might finally find ourselves a place where we belong. With the Avengers.

He is X-Factor's hot-headed speedster, and she is arguably the most dangerous mutant alive. But there was once a time when these two were children, twins on the run from those who feared and hated them, belonging with no one save for one another...until they joined the Avengers! For the first time ever in one titanic tale, see the path that took Wanda and Pietro Maximoff from vagrants to mutant terrorists under Magneto to Earth's mightiest heroes!

Retrieved from "https://heykidscomics.fandom.com/wiki/Avengers_Origins:_The_Scarlet_Witch_%26_Quicksilver_Vol_1_1?oldid=1430449"
Community content is available under CC-BY-SA unless otherwise noted.