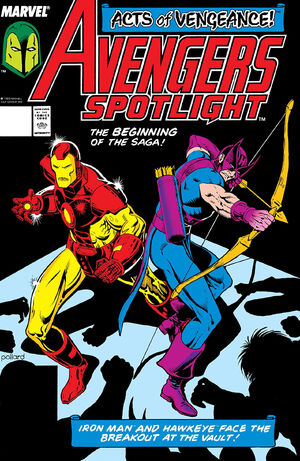 Appearing in "Tales from the Vault"Edit

One of the most powerful villains in the Marvel Universe has a long-standing grudge against the Avengers. This time he's come up with the ultimate plan to destroy them!

Hawkeye makes reference to the Armor Wars, when Tony Stark went out to find & destroy technology stolen from him; during this he attacked the Vault to disable the Guardsman armor.

Retrieved from "https://heykidscomics.fandom.com/wiki/Avengers_Spotlight_Vol_1_26?oldid=1410257"
Community content is available under CC-BY-SA unless otherwise noted.