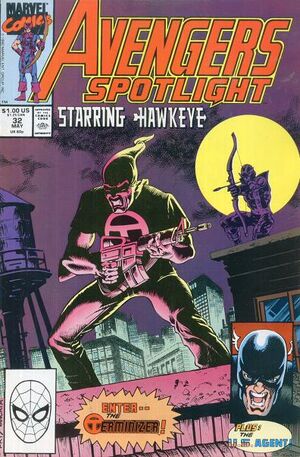 "It means TERMINIZER! And you gangs are done! Your done laughing. Done hurting people. Done with everything- except BLEEDING.

After dicovering the body of Reynaldo Cortizar, who died on a street where a large T was painted, Hawkeye decides to go out and fight crime. Meanwhile a gang of criminals called he Stone Perfs find a threatining message acompinied with a large yellow T. Upon asking what it means a man steps out of the shadows declaring that it means "Terminizer" and guns the Perfs to death. Flying into Perf territory, Hawkeye begins to clear out criminals, but after clearing out the criminals, Terminizer appeared, killing the incapitated Perfs. Upon returning to the Avenger's Compound, Wonder-man informs Hawkeye of the news in which the reporter claimed that Hawkeye had declared war on the gangs of L.A.

Appearing in "The Xenophobic Man, Part Two: Methods and Standards"Edit

Synopsis for "The Xenophobic Man, Part Two: Methods and Standards"Edit

US Agent travels to the Texas-Mexico border on the search of a pshycopath killing illegal immegrants entering the country from Mexico, which leads him to a group of people called the Sanctuary Movement, a safehouse for illegals, who attack him unill the leader, Father Kevin Grass comes and US Agent talks him into putting down their weapons, only to discover they are fighting the same cause. Meanwhile a man in a football helmet has broken into a hospital and killed the mexican children there and then threatens the nurse with a child at gunpoint, to tell him where the Sanctuary Movement is. She informs him it is in a Church in Quemado, and begs him not to hurt the child. He tells her he is the child's salvation and two gunshots are fired.

Retrieved from "https://heykidscomics.fandom.com/wiki/Avengers_Spotlight_Vol_1_32?oldid=1410263"
Community content is available under CC-BY-SA unless otherwise noted.