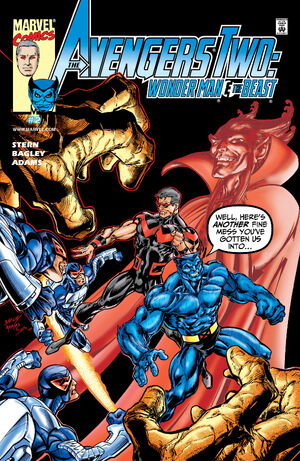 Appearing in "Nightmares and Memories"Edit

Synopsis for "Nightmares and Memories"Edit

Simon wakes up at Neal Saroyan’s condo after having a nightmare about Mephisto. He wonders if he’s messing with his head again. He’s also concerned that the dream involved Lotus, who is responsible for much of the trouble in his past life. Neal arrives with some posters, and wants to line Simon up with some work. Simon isn’t interested. He is there on a purpose and that doesn’t include self-promotion. He thinks about his ex-fiancé, Alex Flores, and Neal mentions that she’s remarried. Simon and Hank decide to visit her at the home she shares with her husband, Felix Simon. Their meeting is amicable and they both realize how much they’ve both lost. However, times change and, at this moment, they are being spied upon by Bob O’Bryan, the husband of Diane Cummings, who is reporting his findings to Lotus. Simon excuses himself as he has things to do downtown, so he and Hank head towards the courthouse. En route, they are attacked by Armed Response, but they defeat them with some ease. Later, at the courthouse, Simon tries to hand himself in to the police for two deaths he feels responsible for. The cops are having none of it, and Simon flies off to find somewhere he can think. At his own grave, Hank finds him again and has with him two people who help put Simon on the right track again; assuring him that he isn’t responsible for either of those deaths. Feeling better, Simon joins Hank at a charity function, where he notices Lotus amongst the crowd. As he pumps her for some answers, she takes control of Bob O’Bryan and, in an alleyway nearby, a monster wakes. The twenty-foot stone giant comes crashing through the wall. The Colossus lives again.

Retrieved from "https://heykidscomics.fandom.com/wiki/Avengers_Two:_Wonder_Man_%26_Beast_Vol_1_2?oldid=1412179"
Community content is available under CC-BY-SA unless otherwise noted.