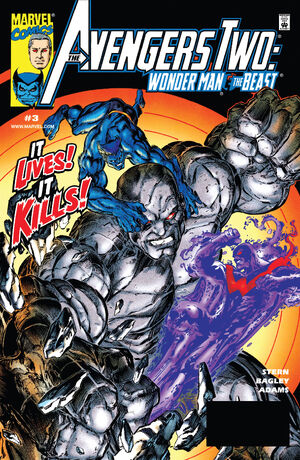 At a gala benefit, Wonder Man and Beast are attacked by a stone giant under the control of Simon’s old enemy, Lotus. She has hypnotized Bob O’Bryan, who controls the creature, and Lotus uses the giant to fly them away from the building. Wonder Man follows, and Hank acquires a helicopter from a hapless news crew. Wonder Man is still trying to figure the wherewithal of Lotus being back from the dead, as he and the Colossus clash high above a freeway. He manages to tear one of the creature’s limbs off, and is about to use it as a baseball bat when the limb frees itself from his grasp and attacks him. As Diane Cummings explains Bob O’Bryan’s story to Beast, Wonder Man struggles against the giant. Beast takes matters into his own hands, and makes a play for Lotus, who is being carried by the creature. She tries to mind control Hank, but he’s strong-willed enough to not fall for her charms. He knocks her unconscious, which sends the Colossus plummeting towards the freeway. Hank saves himself, Bob and Lotus, while Wonder Man manages to divert the giant to safety, ultimately saving many people below. Despite his efforts, Simon still doesn’t feel like he deserves his good fortune, and it takes the appearance of a former obsessed fan to make him realize that he can learn from his mistakes and make better sense of the future. He decides to set up Second Chances, a foundation to help people in similar circumstances as himself. Finally, Wonder Man is at peace with himself and he joins Hank for a well deserved surfing session.

Retrieved from "https://heykidscomics.fandom.com/wiki/Avengers_Two:_Wonder_Man_%26_Beast_Vol_1_3?oldid=1412180"
Community content is available under CC-BY-SA unless otherwise noted.