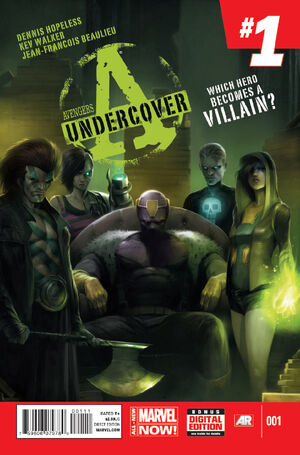 Dude turns into a giant monster toad with indestructible skin and four-foot teeth. He's down in a pit full of bad guys. What's the worst that could possibly happen?

Three months have passed since the young heroes have escaped Arcade's latest Murderworld. And many will never be the same.

In the present, Cammi reunites with Hazmat, Chase Stein, Nico Minoru, and Deathlocket after Anachronism summons them to England. Cullen Bloodstone has dropped out of the Braddock Academy, and he has become obsessed with killing Arcade, ultimately tracking him to Bagalia. Though this isn't all that bad, Anachronism then reveals that Cullen has formed an alliance with the Masters of Evil, who control the country. Baron Helmut Zemo is leading the Masters of Evil following the death of Max Fury and is assisted by Madame Masque (who works as Baron Helmut Zemo's right-hand woman) and Constrictor (who works as Baron Helmut Zemo's bodyguard). Additionally, Baron Helmut Zemo has also accepted Daimon Hellstrom into his inner circle of the Masters of Evil. Now these unfortunate heroes have to embark on a new mission: rescue Cullen before he becomes a true Master of Evil.

Retrieved from "https://heykidscomics.fandom.com/wiki/Avengers_Undercover_Vol_1_1?oldid=1517771"
Community content is available under CC-BY-SA unless otherwise noted.