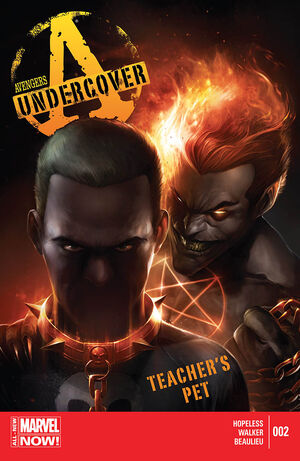 In their first step to rescue Cullen Bloodstone, the heroes teleport to Bagalia in disguise and locate their friend at the Hole (a Bagalian bar that is owned by Arcade). After a fight with the villains there, Cullen reveals that he has become a full member of the Masters of Evil, having been accepted by them (though it is implied that Daimon Hellstrom is actually manipulating Cullen through his dark magic). Constrictor and Madam Masque arrange for Cullen to teleport the group to a nearby swanky party at Massacrer Casino hosted by Arcade so that they can get revenge on him for all the pain he caused them.

• Our teen heroes infiltrate the Avengers’ arch nemesis…but will they ever get out?

• Bloodstone + the Son of Satan = Hell on Earth!

Retrieved from "https://heykidscomics.fandom.com/wiki/Avengers_Undercover_Vol_1_2?oldid=1430451"
Community content is available under CC-BY-SA unless otherwise noted.