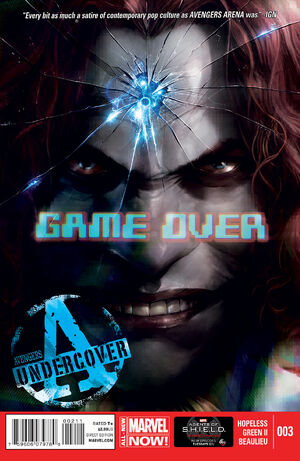 Whatever you say...kid. WELCOME TO MURDER WORLD!

The leaders of the Masters of Evil - Baron Zemo, Madame Masque, Constrictor and Daimon Hellstrom - watch on with anticipation as the heroes try to avoid being killed. That is because Arcade has arranged a very "festive" party at "Massacrer Casino", which serves as the testing grounds for his newest version of Murderworld: fancy parties at Casino where the rich and powerful can try and kill each other to prove their supremacy. As the fighting gets more and more intense, Hazmat turns catatonic as the heroes disable Arcade's power supply. Arcade starts to opine, while attacking the heroes, that the events of Avengers Arena are his masterpiece and something that he himself can never top. After mocking the heroes for being unable to kill him, Hazmat wakes up and blows up the villain once and for all. They have defeated Arcade. But now Baron Zemo, Madame Masque, Constructor, and Daimon Hellstrom begin plotting their next move regarding the heroes. And it will live up to their name.

• What happens when the Murder World survivors confront their former captor?