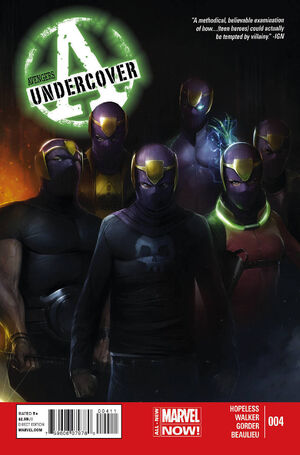 No offense, yo... but why are we all sweating this? Even if Cammi's right and the whole world saw us here. We didn't kill Arcade... Hazmat did.

Back with the heroes at Massacrer Casino, Cammi realizes Death Locket never took out the cameras as Miss Coriander is devastated at the loss of Arcade when they get word S.H.I.E.L.D. is going to arrest them under suspicion they are part of the Masters of Evil. They try to flee while evading the other guest, but S.H.I.E.L.D. has already arrived in S.H.I.E.L.D. Helicarrier Circe. Thanks to their Necromancers jamming Nico's spells, the group is taken down by the S.H.I.E.L.D. Agents and imprisoned quickly.

At the S.H.I.E.L.D. detention center, Karolina Dean, Molly Hayes, Finesse, Striker, Elsa Bloodstone, and several unnamed parents of the framed children come to visit the group. After Cammi has a truly touching moment with her mother, Daimon Hellstrom teleports the group back to Bagalia, where Baron Zemo offers the group a chance to truly join the Masters of Evil.

• What did the teen survivors of Murder World do last issue to become Public Enemy #1—and what does Zemo tempt them with in response?

• Who accepts Zemo’s invite? And who goes rogue?

• Our first arc comes to a chilling close—and what happens here makes it too late for our heroes to go back!

Retrieved from "https://heykidscomics.fandom.com/wiki/Avengers_Undercover_Vol_1_4?oldid=1430453"
Community content is available under CC-BY-SA unless otherwise noted.