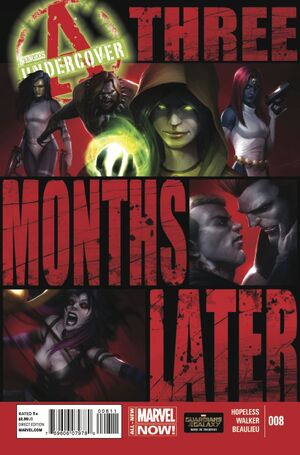 Hazmat, I know the deal. Uncover Avengers or whatever. Pretending to be bad guys so we can bring Zemo down from the inside.

EVERYTHING CHANGES AS WE JUMP THREE MONTHS LATER!

• After last issue's huge reveal, what else has happened in the 90 days since the events of issue #7?

• Why is Hazmat working for Madame Masque...and maybe Mystique and Sabretooth?

• And how does this issue's cliffhanger change everything again?

Retrieved from "https://heykidscomics.fandom.com/wiki/Avengers_Undercover_Vol_1_8?oldid=1526127"
Community content is available under CC-BY-SA unless otherwise noted.