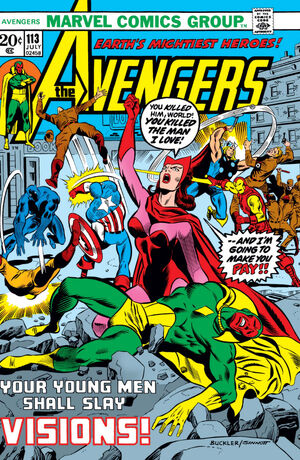 Mister "Friend", I don't know about your God, but a God of Love is Mine!

Appearing in "Your Young Men Shall Slay Visions!"Edit

Synopsis for "Your Young Men Shall Slay Visions!"Edit

After making repairs to the Statue of Liberty, a spectator is upset by the image of the Scarlet Witch (a mutant) and the Vision (an android) sharing a loving embrace. As this development gets media coverage, the Avengers begin getting hate mail as well. Meanwhile, the man who watched the spectacle has organized a group of like minded people who think that romance between a mutant and an android is an insult to god, band together and become The Living Bombs, a group of extremists strapped with bombs that are set off by detonators on the top of their helmets.

Later, the Avengers make short work of a bunch of thugs terrorizing a neighborhood. After the battle, one of the members of the Living Bombs manages to get close to the Vision and detonate her bomb, seriously injuring the android. The Avengers take him to Stark Industries, where Tony Stark attempts to heal him. The Living Bombs learn of this and attack the Stark Industries building in hopes of destroying the Vision, however they are opposed by the Avengers. The Avengers manage to stop the Living Bombs from destroying the Vision, however all the members end up blowing themselves up when caught in a tornado created by Thor.

After the battles climax, Tony Stark informs the Avengers that the Vision will pull through, much to the relief of his comrades. Wanda however, is angry that everyone seems to be against her romance with the Vision and storms out.

Retrieved from "https://heykidscomics.fandom.com/wiki/Avengers_Vol_1_113?oldid=1408257"
Community content is available under CC-BY-SA unless otherwise noted.