Start a Wiki
Part of the 'Avengers/Defenders War' event 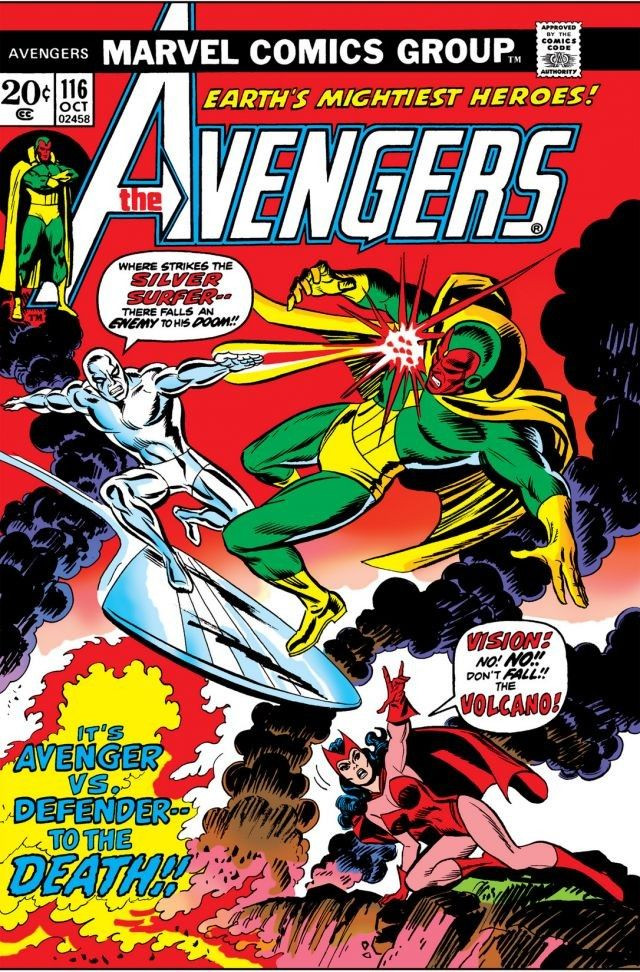 Appearing in "The Avengers Vs The Defenders Chapter 2: Betrayal!"Edit

Synopsis for "The Avengers Vs The Defenders Chapter 2: Betrayal!"Edit

Synopsis for "Chapter 3: Silver Surfer VS The Vision and the Scarlet Witch"Edit

Seeking a fragment of the Evil Eye, the Silver Surfer arrives on the island of Rurutu, French Polynesia. There he is worshiped by the people as if he were a god. He learns from the people that they offer sacrifice to a volcano god and deduces that is where the fragment of the Evil Eye must be located. He enters the volcano and uses his powers to search for the Evil Eye fragment. As he does, his powers activate the volcano and causes an explosion. The explosion causes the Scarlet Witch's Quinjet to be blown out of the sky, the Witch herself knocked unconscious. Thinking the Silver Surfer attacked the Scarlet Witch purposely, the Vision attacks him. Vision and Silver Surfer fight it out, and cause the fragment to be exposed. Vision appears to gain the upper hand but gives up on collecting the Evil Eye fragment when the flowing lava endangers the life of the Scarlet Witch. This allows the Silver Surfer to collect the piece and escape ... This story is continued in Defenders #9

Retrieved from "https://heykidscomics.fandom.com/wiki/Avengers_Vol_1_116?oldid=1719103"
Community content is available under CC-BY-SA unless otherwise noted.