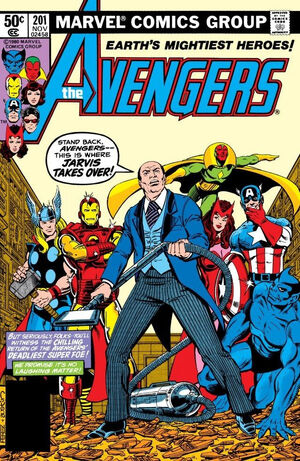 Appearing in "The Evil Reborn"Edit

Synopsis for "The Evil Reborn"Edit

Jarvis is given a few days off for the first time in awhile. He decides to visit his Mother, who looks distraught. Jarvis learns that an adult bully, named The Bruiser, has been terrorizing the neighborhood. He has been attacking people, including his Mother, and stealing their money, all the while humiliating them. Jarvis decides to take on this bully, after he learns that his Mother's eggs were vandalized. Jarvis defeats The Bruiser in short order, with the help of the other townspeople, embarrassing The Bruiser, and forcing him to terrorize another neighborhood, while having his Mother make pudding for everyone in celebration.

Retrieved from "https://heykidscomics.fandom.com/wiki/Avengers_Vol_1_201?oldid=1632289"
Community content is available under CC-BY-SA unless otherwise noted.