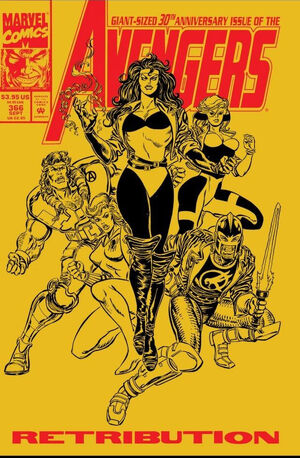 Appearing in "The First Rule!"Edit

Synopsis for "The First Rule!"Edit

Sean Dolan gets caught up in a bank robbery in progress by the Plug-Uglies and transforms into Bloodwraith. He takes the soul of Foam but an explosion kills Flame before the sword reaches him as Deadpool appears claiming the disks found on the ground are for him.

At Castle Garrett, Dane Whitman talks with Victoria Bentley, who recalls Bloodwraith's origin and wonders if her fate is intertwined with him. Whitman receives a call from Crystal about Dolan's location and he takes off.

In Sarajevo, Bloodwraith appears ready to settle his score with Deadpool but the sword's bloodlust has been settled by Victoria so Deadpool is allowed to go free but not before Bloodwraith issues a warning before departing.

Retrieved from "https://heykidscomics.fandom.com/wiki/Avengers_Vol_1_366?oldid=1632598"
Community content is available under CC-BY-SA unless otherwise noted.