Start a Wiki
Part of the 'Avengers Disassembled' event 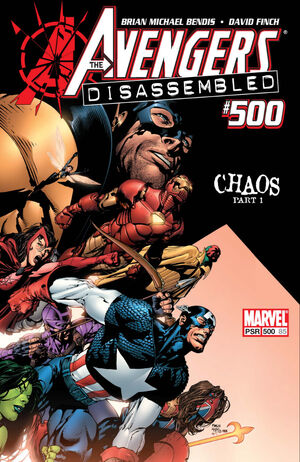 Appearing in "Avengers Disassembled, Chaos (Part I of IV)"Edit

Synopsis for "Avengers Disassembled, Chaos (Part I of IV)"Edit

In Avengers Mansion, Hawkeye, Ant-Man, Wasp, Captain Britain and She-Hulk are enjoying breakfast. All the while, Hawkeye is talking about how Viper is Madame Hydra and how attractive she is. Then suddenly, proximity alarms alert them to the return of an undead Jack of Hearts. Ant-Man, who had seen Jack die personally saving his daughter Cassie, goes out to talk to him. However, Jack says, "I'm sorry", before spontaneously detonating, causing a massive explosion that kills Ant-Man, destroys a portion of the Mansion and nearly buries the other Avengers, including Jarvis, with rubble.

Meanwhile at the United Nations, Tony Stark, apparently drunk, insults the delegate from Latveria and threatens to kill him. He quickly adjourns to another room while Yellowjacket apologizes for him on his behalf. Then, the Scarlet Witch asks if he had been drinking, to which he answers no. They then receives the Avengers Code White signal.

Back at the mansion, Captain America has arrived with S.H.I.E.L.D. personnel. They then all notice the Quinjet coming in at a very fast speed, before crashlanding. The Vision then emerges from the wreckage, informing his comrades that he's no longer in control of the organisms that make up his body. He warns that they are about to be punished. He then expels fives metallic balls from his mouth which mold themselves as fully functional Ultrons. The Avengers attack the Ultrons and discover that a decapitation can render Ultron non functional. Just when they're getting the upper hand, She-Hulk loses control, angry that Ant-Man is dead for no reason. As her muscle mass expands, she rips the Vision in half. Wasp tried to remind She-Hulk that she's not her cousin, only to be violently slapped away. Cap attempts to stop her, only for She-Hulk to ram a truck onto him.

In the darkness, two voices are discussing over whether the Avengers have suffered enough.

Retrieved from "https://heykidscomics.fandom.com/wiki/Avengers_Vol_1_500?oldid=1547550"
Community content is available under CC-BY-SA unless otherwise noted.