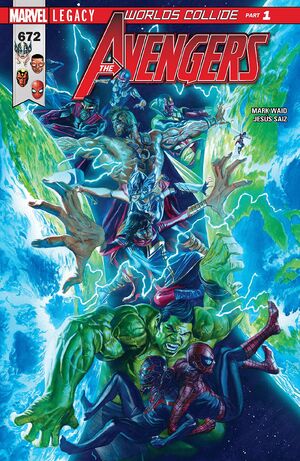 Following the events of GENERATIONS comes the long-promised clash between the Avengers and the Champions! The countdown has started as the High Evolutionary, a twisted scientist determined to create a better world at all costs, sets the Earth on a collision course with destruction! The Avengers and the Champions are ready to meet this threat — but will their first cataclysmic clash deter them from Changing the World? PLUS: Includes 3 bonus MARVEL PRIMER PAGES! Story by Robbie Thompson and a TBA artist!

Retrieved from "https://heykidscomics.fandom.com/wiki/Avengers_Vol_1_672?oldid=1651907"
Community content is available under CC-BY-SA unless otherwise noted.