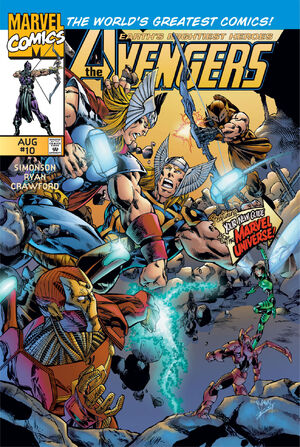 Is this the Avengers' darkest hour? It's Avenger vs. Avenger as former teammates and friends go head-to-head in a fight to the finish! But who are the real Avengers, and will any of them survive to face the fiend that's waiting in the wings, the trickster god, Loki?

Retrieved from "https://heykidscomics.fandom.com/wiki/Avengers_Vol_2_10?oldid=1647450"
Community content is available under CC-BY-SA unless otherwise noted.