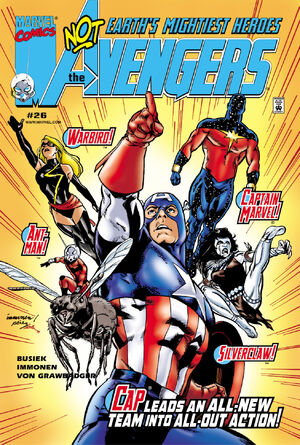 Appearing in "...Under Cover of Night!"Edit

Synopsis for "...Under Cover of Night!"Edit

Captain America recruits his own team of Avengers to infiltrate the New York headquarters of the Triune Understanding. Unfortunately, Captain America turns out to be the Taskmaster in disguise and he succeeds in having them blamed for the destruction of the headquarters, which adds more pressure to the public outrage against the Avengers.

Retrieved from "https://heykidscomics.fandom.com/wiki/Avengers_Vol_3_26?oldid=1408591"
Community content is available under CC-BY-SA unless otherwise noted.