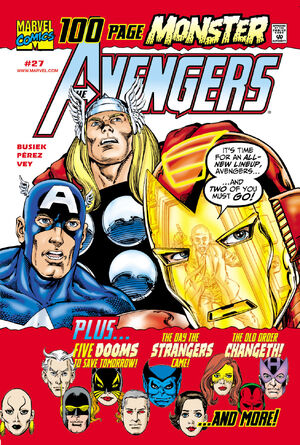 The Avengers are forced by an outraged public to make a line-up change. Government liaison Duane Freeman wrestles with the core members to create a new line up that is politically sensitive. Iron Man can't shake a gut feeling that the Triune Understanding is behind this entire event, but can't find any proof. Disgusted with this attempt to please the media, Thor leaves the active roster. Firestar and Justice exit as well in hopes of spending more time with each other. Wonder-Man also steps down as an active member. The lineup of Goliath (Henry Pym), Iron Man, Scarlet Witch, She-Hulk, Triathelon, Wasp and Warbird is revealed to the public.

Retrieved from "https://heykidscomics.fandom.com/wiki/Avengers_Vol_3_27?oldid=1530897"
Community content is available under CC-BY-SA unless otherwise noted.