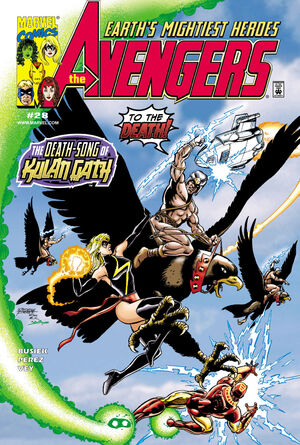 The Avengers do a bit of charity work for the Maria Stark Foundation and earn some much needed good PR. Silverclaw must return to her homeland to face a mysterious threat and the Avengers aren't about to let her go alone. Her home village has been radically transformed in a magical city under the control of the wizard Kulan Gath. He has erected a mystical barrier around the city that transforms any who enter into sword and sorcery versions of themselves and allegiance to Gath. They regroup outside the city and Iron Man attempts to bury the hatchet with Triathlon, but he doesn't listen.

Retrieved from "https://heykidscomics.fandom.com/wiki/Avengers_Vol_3_28?oldid=1408593"
Community content is available under CC-BY-SA unless otherwise noted.