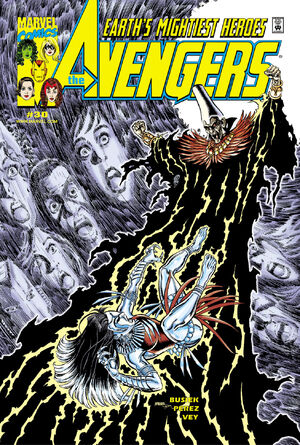 Kulan Gath prepares an elaborate ceremony in which the goddess Peliali, Silverclaw's mother, and the Avengers are to be sacrificed to the Dark Gods as payment for his ascension into godhood. The Avengers manage to get free and battle Gath's slaves. Silverclaw restores her mother's power by appeal to her people who see beyond Gath's magic. Gath is torn apart by the Dark Gods, but Peliali was fatally injured. The lurking figure in last few issues turns out to be Yellowjacket, but his relation to Pym isn't explained.

Retrieved from "https://heykidscomics.fandom.com/wiki/Avengers_Vol_3_30?oldid=1408595"
Community content is available under CC-BY-SA unless otherwise noted.