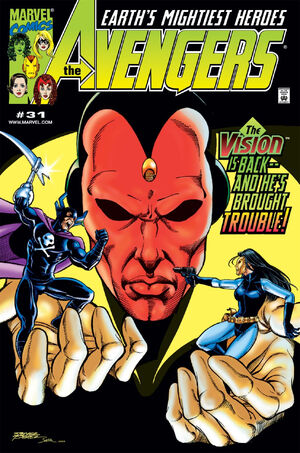 HI! I'm the Wasp! And you've just been STUNG!

Appearing in "And So It Begins..."Edit

Synopsis for "And So It Begins..."Edit

The Vision assembles the Avengers to deal with a secret Maggia leaders' meeting hosted by the Grim Reaper. They break up the meeting and battle squads of dreadnoughts. The Grim Reaper escapes and Iron Man learns that Madame Masque is in trouble.

Retrieved from "https://heykidscomics.fandom.com/wiki/Avengers_Vol_3_31?oldid=1547674"
Community content is available under CC-BY-SA unless otherwise noted.