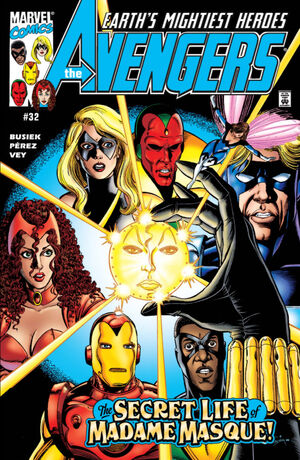 Appearing in "Behind the Masque!"Edit

Synopsis for "Behind the Masque!"Edit

She-Hulk leaves the active roster, allowing the Vision to resume his duties, just as Black Widow arrives with more information on Madame Masque. Meanwhile, Madam Masque and her forces are on full alert after the Grim Reaper's attack. The Avengers catch up with the Grim Reaper and his Steelskulls, but it becomes a four-way battle as Madame Masque's forces and Count Nefaria, with Wonder Man and Atlas, join in.

Retrieved from "https://heykidscomics.fandom.com/wiki/Avengers_Vol_3_32?oldid=1547675"
Community content is available under CC-BY-SA unless otherwise noted.