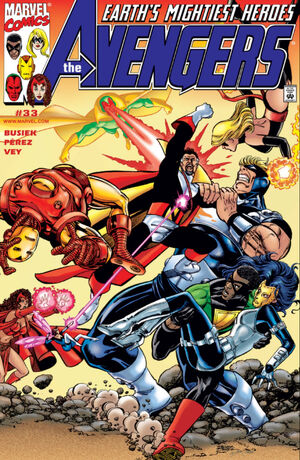 The Avengers try in vain to stop Count Nefaria from attacking his daughter, Madame Masque. Wonder Man and Atlas, under Nefaria's influence, level Masque's base of operations. However, the Avengers keep Masque out of Nefaria's reach and force him to withdraw. The Grim Reaper is captured and Masque agrees to help the Avengers against her father.

Retrieved from "https://heykidscomics.fandom.com/wiki/Avengers_Vol_3_33?oldid=1408598"
Community content is available under CC-BY-SA unless otherwise noted.