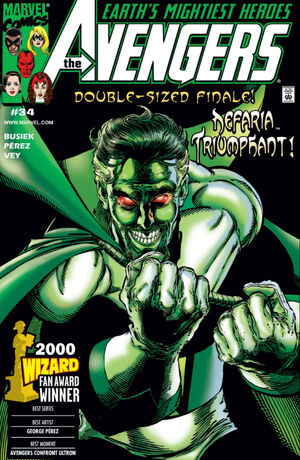 You'll never succeed, Nefaria! You'll never rule the world! There'll always be resistance -- ALWAYS! And it'll find a way -- a way to TAKE YOU DOWN!

Appearing in "The Nefaria Protocols"Edit

Synopsis for "The Nefaria Protocols"Edit

The Avengers and Thunderbolts engage Nefaria in hopes of preventing the detonation of his ionic bomb, which would irradiate the Earth with ionic energy and allow Nefaria to control every living thing on it. Nefaria fights dirty and takes their battle into a neighboring small town where the Avengers and Thunderbolts are forced into damage control mode. However, Madame Masque, with the complete Ionic Lock weapon, is confronted by her bio-duplicate, who was once an Avenger. Nefaria kills the bio-duplicate, but Madame Masque unleashes the full power of the Ionic Lock on Nefaria. Meanwhile, Wonder Man and Atlas absorb the energy of the ionic bomb and foil Nefaria's plans. Nefaria, enraged at his defeat, loses control of his ionic self and explodes.

Retrieved from "https://heykidscomics.fandom.com/wiki/Avengers_Vol_3_34?oldid=1549325"
Community content is available under CC-BY-SA unless otherwise noted.