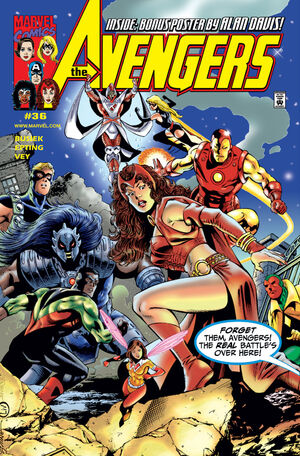 Appearing in "No Rest for the Weary"Edit

Synopsis for "No Rest for the Weary"Edit

The Avengers finish rounding up stray alien criminals from the Maximum Security event. Peggy Chandler, wife of the 3-D man, barges into the Avengers mansion and accuses Triathlon of abducting him. Unfortunately, before Triathlon can offer any explanation, the mansion is attacked by Pagan and Lord Templar. The Wasp gets an urgent message from Captain America, who's in Slorenia with S.H.I.E.L.D. and needs help against Bloodwraith. She's forced to send off part of the team to Slorenia while the other is still being kept busy with Pagan and Lord Templar.

Retrieved from "https://heykidscomics.fandom.com/wiki/Avengers_Vol_3_36?oldid=1408601"
Community content is available under CC-BY-SA unless otherwise noted.