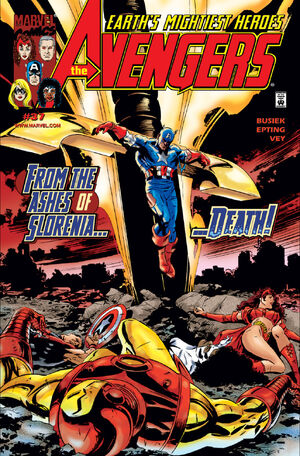 The Avengers' big guns are unable to stop Bloodwraith since he's made of magical energy. However, since his powers are tied into the country of Slorenia the Scarlet Witch is able to use her chaos magick to imprison him within Slorenia's borders. Meanwhile back at Avengers mansion, the rest of the team continues to battle against Pagan and Lord Templar. The villains are defeated by solid efforts by Triathlon and Jack of Hearts, who gets all the media's attention while the villains are mysteriously whisked away.

Retrieved from "https://heykidscomics.fandom.com/wiki/Avengers_Vol_3_37?oldid=1408602"
Community content is available under CC-BY-SA unless otherwise noted.