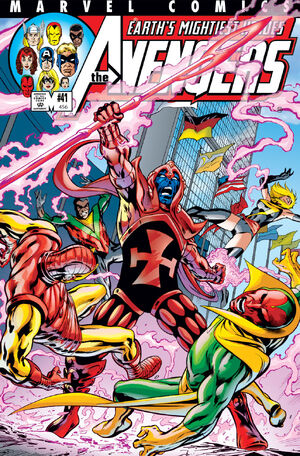 Appearing in "The High Ground"Edit

Synopsis for "The High Ground"Edit

Wonder Man decides to head out west to help with his foundation's fund raising (and get him some publicity of course), but Wanda chooses to stay with the Avengers. Warbird, Triathlon, Goliath, Iron Man, Wasp, and Vision are called in to confront a rampaging Scarlet Centurion. After a significant effort they take him down, only to realize that Kang is the mastermind, and he quickly demonstrates that he is serious. However, he isn't here to fight, but rather to offer his services to help against an imminent danger. Meanwhile, Cap, Thor, Firebird, Quicksilver, and the Black Knight investigate an emergency in Siberia.

Retrieved from "https://heykidscomics.fandom.com/wiki/Avengers_Vol_3_41?oldid=1408606"
Community content is available under CC-BY-SA unless otherwise noted.