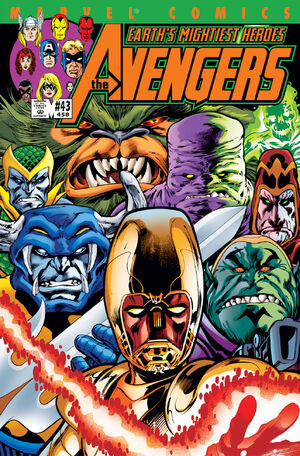 The Russian superpower calling himself The Presence has decided to genetically modify the Russian people in an attempt to rebuild his defeated country. The Avengers are divided on many fronts: battling the irradiated Winter Guard, battling Attuma and the Atlantean forces, and battling invading Deviant forces. Meanwhile, Kang and the Scarlet Centurion watch from orbit and continue to orchestrate these attacks.

Retrieved from "https://heykidscomics.fandom.com/wiki/Avengers_Vol_3_43?oldid=1408608"
Community content is available under CC-BY-SA unless otherwise noted.