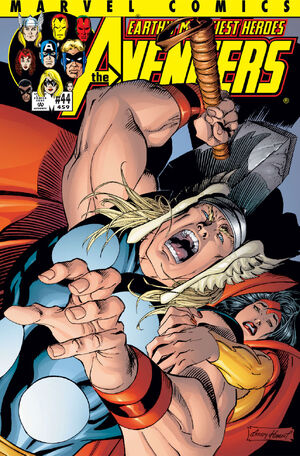 Appearing in "Down Among the Dead Men!"Edit

Synopsis for "Down Among the Dead Men!"Edit

The Avengers successfully defend the planet from the attacks by Deviant and Atlantean forces. Warbird challenges the local Deviant leader to a duel for leadership and defeats his champion to become their new leader. Meanwhile in Siberia, Thor and Firebird stand alone against the army of irradiated beings controlled by the Presence. Thor takes the battle directly to the Presence and defeats him by using his hammer Mjolnir to absorb the radiation.

Retrieved from "https://heykidscomics.fandom.com/wiki/Avengers_Vol_3_44?oldid=1408609"
Community content is available under CC-BY-SA unless otherwise noted.