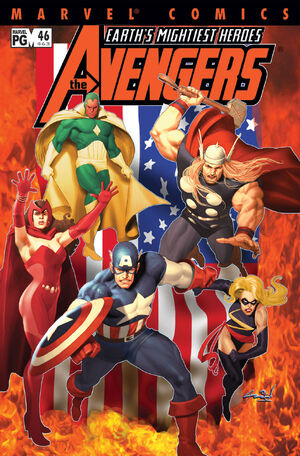 We have no choice. So we fight -- and we win. There are no other options.

Kang unleashes his warriors and the Avengers's big guns (Hercules, Thor, She-Hulk) and an international contingent of soldiers engage them in battle. Meanwhile, Yellowjacket, Warbird, Quicksilver, and Silverclaw do their best to assess the new threat of the Master and his constructs that he has erected around the world. They investigate one of the Master's bases and battle through his defenses only to be apparently destroyed by the Master. Meanwhile, Cap, Photon, Jack of Hearts, and the Scarlet Witch rocket into orbit to confront Kang directly.

Retrieved from "https://heykidscomics.fandom.com/wiki/Avengers_Vol_3_46?oldid=1408611"
Community content is available under CC-BY-SA unless otherwise noted.