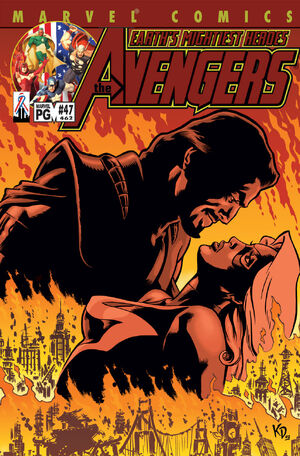 Appearing in "In The Heart of Battle"Edit

Synopsis for "In The Heart of Battle"Edit

Warbird survived the Master's attempt to destroy them, but is attacked by his plodex wolves. The Scarlet Centurion comes to her rescue but she refuses his help and doesn't want anything to do with him. He proves that he isn't the Marcus that tricked her into loving him and that his feelings for her are genuine. However, they are still on opposing sides of an ongoing war and rejoin their respective sides.

Retrieved from "https://heykidscomics.fandom.com/wiki/Avengers_Vol_3_47?oldid=1501818"
Community content is available under CC-BY-SA unless otherwise noted.