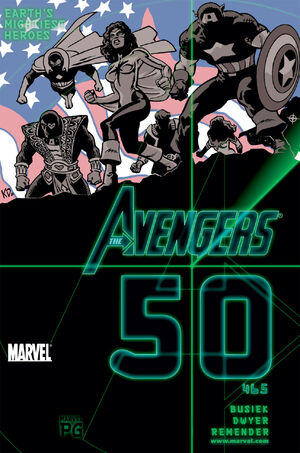 Appearing in "And It Came to Pass"Edit

Synopsis for "And It Came to Pass"Edit

Quasar and the Living Lightning rescue Captain America, Jack of Hearts, and Photon after Kang's attack. They meet up with Jonathan Tremont who prepares to face the threat of the Tri-Evil. Unfortunately, he is driven by a power lust and seeks to destroy the Tri-Evil for his own means. Triathlon, with the essence of the 3-D man, wrestles the power away from Tremont and destroys the Tri-Evil. The Avengers return to Earth only to learn that it has surrendered to Kang.

Retrieved from "https://heykidscomics.fandom.com/wiki/Avengers_Vol_3_50?oldid=1408615"
Community content is available under CC-BY-SA unless otherwise noted.