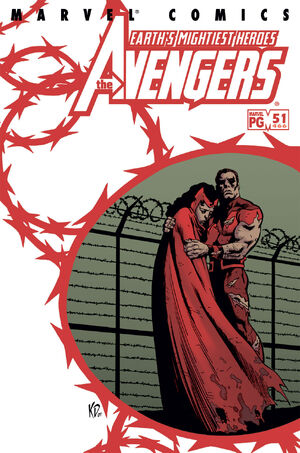 Appearing in "Prisoners - A Love Story"Edit

Synopsis for "Prisoners - A Love Story"Edit

Wonder Man is captured by Kang's occupation forces and becomes a prisoner in a detention camp. The Scarlet Witch is also a prisoner there and they have a chance to discuss their relationship. They decide that their relationship has been broken for some time but they haven't had the chance to talk about it. They devise a plan and Wonder Man escapes leaving Kang and his forces believing that they have killed him.

Retrieved from "https://heykidscomics.fandom.com/wiki/Avengers_Vol_3_51?oldid=1408616"
Community content is available under CC-BY-SA unless otherwise noted.