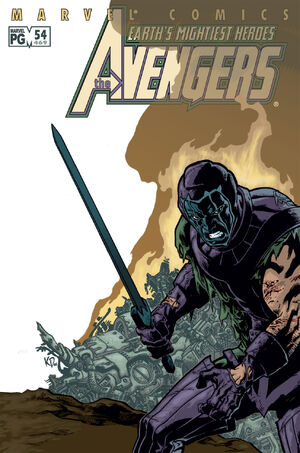 Appearing in "A Good Day to Die"Edit

Synopsis for "A Good Day to Die"Edit

Kang rises from the rubble of what used to be the Damocles base and is confronted by the Avengers. Captain America takes Kang on single-handedly and defeats him. The Avengers enjoy the worldwide celebration. The Scarlet Centurion rescues Kang from his imprisonment and finds a rather ungrateful father who was resigned to his fate. Unable to forgive the betrayal of his son, Kang kills Marcus, who turns out to be another of a long line of clones who have failed to live up to their father's expectations.

Retrieved from "https://heykidscomics.fandom.com/wiki/Avengers_Vol_3_54?oldid=1408619"
Community content is available under CC-BY-SA unless otherwise noted.