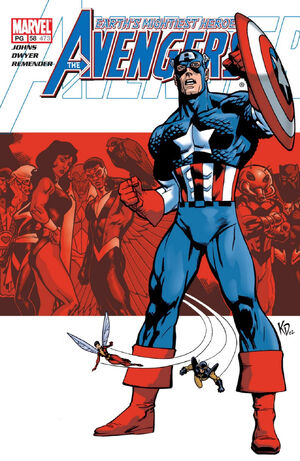 The Avengers take control of the situation: Captain America addresses the UN and Tony Stark gains the support of the European Union. Namor comes to the rescue of a US navy ship threatened by a mysterious maelstrom and returns to active duty. Elsewhere, the Wasp and Yellowjacket, caught in the maelstrom that took Washington, discover that the world's capitals have been merged into one big city and it seems that the villain Scorpio is behind it all.

Retrieved from "https://heykidscomics.fandom.com/wiki/Avengers_Vol_3_58?oldid=1408623"
Community content is available under CC-BY-SA unless otherwise noted.