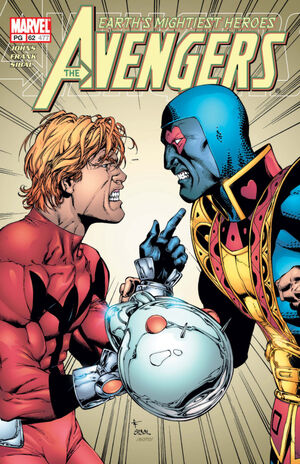 Scott Lang, because of his recent adventures with the Avengers, looses custody of his daughter to his ex-wife who is remarrying. He decides to throw all of energy into becoming an Avenger. Meanwhile Jack of Hearts learns a few things about his past and that he'll have to spend more time in the Zero Room to prevent his powers from detonating. He doesn't take the news well and takes out his anger and frustration on Iron Man, Yellowjacket, and the newly reinstated Ant-Man.

Retrieved from "https://heykidscomics.fandom.com/wiki/Avengers_Vol_3_62?oldid=1722911"
Community content is available under CC-BY-SA unless otherwise noted.