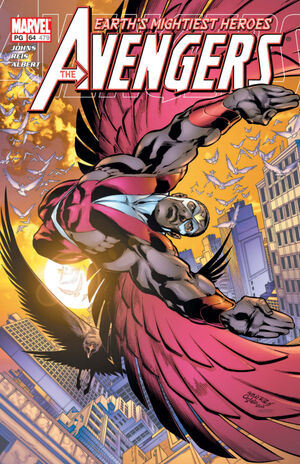 Falcon keeps an eye on Henry Gyrich at the request of Captain America who has reluctantly decided to give Gyrich a second chance at being the UN liaison for the Avengers. The relationship between The Falcon and Gyrich is strained at best, but when The Falcon rescues a young woman from The Scarecrow, Gyrich finds he can respect the man. Gyrich trusts him enough to let him in on the fact that the US government is interested in using him to spy on the Avengers.

Retrieved from "https://heykidscomics.fandom.com/wiki/Avengers_Vol_3_64?oldid=1408629"
Community content is available under CC-BY-SA unless otherwise noted.